ESTABLISHMENT OF THE BANK 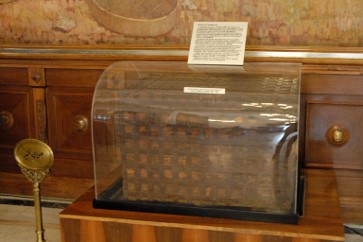 During the first half of the 19th century in the Ottoman Empire, foreign banks began to operate within the country's territory in line with the adoption of Western models of trade and financing. At those times, there was not any sufficient capital accumulation for the establishment of a banking system having a national character, and it was not possible to speak of the existence of a national bank as a source of funding.

The section of the population who suffered from this situation was the farmers, which constituted the vast majority of the working population. The agricultural sector had been completely abandoned to its own fate and as a result, a large group of farmers facing financial hardship were constantly in need of loans provided by private individuals as there was not any corporate financial structure available to which they could apply for loans.

Creditors were usually individuals who engaged with this business field, along with several traders and artisans such as merchants, wholesalers, exporters, brokers, agricultural middlemen, and village grocers, who also sold agricultural supplies. Such high-interest private borrowings were called Usurer or Pawnbroker Loans.

At those days, an annual interest rate of up to 900% would be involved on the basis of 1 Para per day calculation. Thus, being in extreme hardship to pay their debts, the farmers were forced to sell their products to these individuals even before the harvest. (so-called Selem Procedure).

The idea that the State should intervene with the agricultural lending business in order to find remedies to the problems of the downtrodden farmers was gradually finding its place in the newspapers of the time and in the official circles.

Mithat Pasha, the governor at that time of the Nis city in Yugoslavia, which was then under the ruling of the Ottoman Empire, had already achieved successful outcomes in various fields and also closely witnessed the severe conditions which the farmers had to face. As a result of his surveys, he concluded that an organization in that field was imperative and State aid was needed to help to rescue farmers from the hands of loan sharks but it was also important that such aid had to be supported by a public action. Thus, an organization called "Homeland Funds" was established by and under the auspices of the State in 1863, led by Mithat Pasha, utilizing the resources raised by the farmers. This initiative went down in history as the first example of the national banking and constituted the basis of today's Ziraat Bank.

ZIRAAT BANK DURING THE WAR 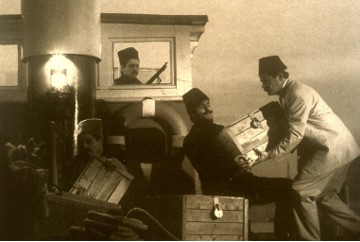 When setting up the very first Homeland Fund in the Pirot Town (Şehirköylü Town) in 1863, Mithat Pasha was inspired by the collective work tradition (imece), which already existed among Turkish customs and which was based on mutual assistance principles.

Homeland Funds took their name from the wooden crates employed. The regular affairs related with the Fund would be run by 4 Fund Custodians, consisting of 2 Muslim and 2 Christian citizens elected by the participant villagers. The journal containing the records of daily transactions, the general ledger and the cash in hand were all kept in these wooden crates. Later, for safety reasons, primitive safes made of iron by local craftsmen were employed instead of these wooden crates.

Upon the entry into force of the "Regulations on Homeland Funds" in 1867, these Funds started to operate throughout the Ottoman Empire (the Funds in Rusçuk, Eski Cuma ve Lefkoşe towns are among the first examples) and continued to serve successfully for many years.

A two thirds (2/3) portion of the profit of the Fund, which was obtained by the deduction of expenses from the incomes obtained as a result of lending operations, was used for the construction and repair works of the basic structures open for common use by public such as schools, roads, bridges in the region where the Fund was operated. In this respect, Homeland Funds also contributed to the development of the country.

However, the deteriorations observed in the operation of these Homeland Funds decreased their effectiveness. The government, considering that these adversities would be eliminated by placing them under the central administration, established "Benefit Funds" in 1883 for the same purposes. Upon the establishment of the Benefit Funds, their management was revised, recording and accounting procedures were carried out in accordance with modern and scientific principles and the Funds were subjected to the direct audit of the central government.

Although this new restructuring ensured a relatively serious management that was open to scientific audits, it did not obviate the need for an entirely new, contemporary organization.

INCREASED NUMBER OF BRANCHES AND ITS ROLE AFTER THE WAR The number of Ziraat Bank branches and funds which were assigned with the task of helping farmers increased from 110 to 300 in 1923. A capital of approximately 2 million TL was provided to the Bank in this period and Bank started to give large credits especially to the regions of the country freed from the occupation.

During 1920s, the country was mostly burnt, destroyed and in poverty, industrial enterprises which were already few in number before the war became inoperative, workbench production based on individual initiatives totally disappeared, and transportation almost came to a standstill. In order to help overcome these difficulties, the number of Ziraat Bank branches was increased and credit facilities were extended within a short period.

With the Ziraat Bank budget law enacted by the Parliament in March 1924, the Bank was transformed into a joint stock company.

Ziraat Bank made positive contributions of great extent in overcoming with minimal damage the serious adverse effects caused by the economic depression that swept the world in 1929 and by the ensuing 2nd World War. During these distressed times when even the bread was rationed, the State was implementing mandatory savings policy and was encouraging everyone to this direction. Ziraat Bank also offered several possibilities for deposits to encourage the people to save money. Also with the money boxes introduced for the first time, it was intended to raise a new, frugal generation. During the same years, various agricultural courses were also opened in collaboration with the Ziraat Bank, aiming to increase agricultural productivity by teaching new farming techniques to farmers.

Ziraat Bank acquired the status of a state-owned economic enterprise by a law adopted in 1937, whereby Ziraat Bank was granted with partial autonomy in its management in order to allow them to provide their services more conveniently. Under the same law, the Istanbul Security Fund that was established in 1868 by also Mithat Pasha in order to be transfer small savings to small investment were placed under the structure of Ziraat Bank.

After 1950, during which years the negative effects of the war decreased gradually, the resources and facilities of the Ziraat Bank were always taken into consideration when new initiatives were planned in agriculture in order to reconstruct villages and villagers.

The Bank, thanks to its management structure based on well-established solid principles and to its experienced and trained staff, has always succeeded to overcome the difficulties it has faced. In 1963, the number of branches serving all around the country increased to 630. Showing a rapid development in all fields, Ziraat Bank played a pioneering role to open a new era in Turkish agriculture upon the production of the first domestic tractor by a Turkish-American Company to which the Bank was a shareholder. The supports provided for the introduction of tractor and harvester era by abandoning local plows, for the utilization of chemical fertilizers instead of natural fertilizers, for supplying healthy and efficient seeds and for pesticide control are all the new steps and advances in this path. Support is provided for the investments made in field improvement and irrigation areas. The credits granted in the fruit growing sector help to develop fruit selling and to ensure export diversification. The resources needed by the cooperatives founded as a result of the organization of farmers are met by Bank's facilities. Pasture improvement, development of cattle fattening and dairy farming, and establishment of the related industries are all ensured by providing aids for the importation of breeding animals. Encouraging loans in various sectors from beekeeping to sericulture are provided by Ziraat Bank's facilities.

Financial support is provided for domestic production of agricultural machinery and implements which are desperately needed by villagers. In this way, modern agricultural machinery and implements that are seen only in the state farms become available for use in private agricultural lands thanks to cheap credit facilities of the Bank and has expanded rapidly. This has led to increased production, and the arable fields are made ready for planting again, which enable the farmers to obtain a 2nd crop.

Ziraat Bank, which has extended its services in order to become the bank of preference by everyone and all segments of population, continues to develop its operations in line with the aim to add value to the country.

Ziraat Bank, which was established in 1863 as a modest charity fund and which developed with great strides in time, is among the most valuable assets of the country today.